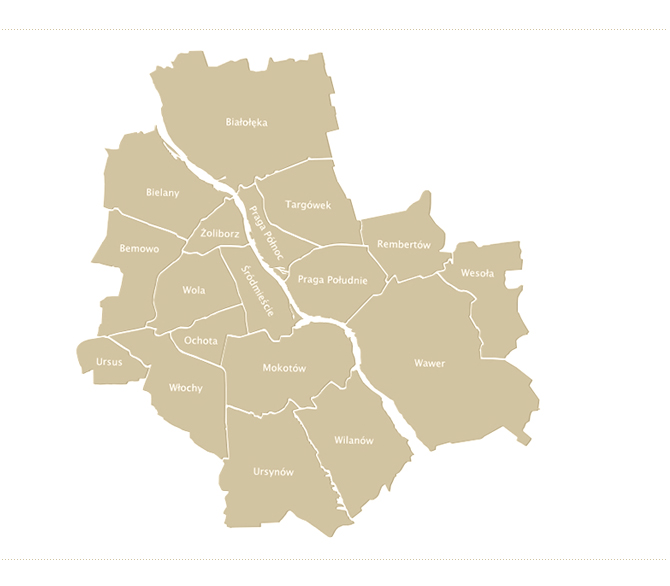 Both in terms of population, as well as the surface, Warsaw is the largest Polish city. Her 18 districts create an integral whole with unique harmony - despite historical and cultural divisions.

In fact, the administrative division of the capital could be carried out in two ways: first - Warsaw law- and left bank, second - just according to the districts. Only one second version is officially recognized, so let's look at all "pieces of the city" in turn.

In Poland, it is more widely known mainly because of the airport - formerly military - where today important automotive events and concerts of music stars take place.. The Military University of Technology is also located here, known for the high-quality education of its students. Bemowo, it became a part of Warsaw only in 1951 year. Today, until recently, modern housing is developing rapidly in the agricultural area.

Located in the northern part of the right-bank of Warsaw, this district is one of the most attractive residential parts of the capital. Lots of housing estates and houses are being built here, which at the same time translates into a huge percentage of residents coming from outside the capital.

Białołęka borders on the Łęgi Czarna Struga Reserve, and on its territory there is a water trail leading to the Zegrze Reservoir.

This is one of the most beautiful Warsaw districts. It is located in the northern part of the city, near the Kampinos National Park. Its character is given mainly by the huge amount of greenery, a large part of which are Lasek Bielański, Park and the Młociński Forest. The Bielański Forest itself is an extremely popular place among the inhabitants of the capital, who like to come here for cycling and hiking trips.

Located in the South, on the left side of the Vistula, counts over 220 thousand inhabitants. There are, among others, embassies and headquarters of many well-known companies and important offices. It is also close to the airport. However, Mokotów is primarily a residential district, and the dignified - often pre-war - villas, hidden among the deep greenery of its older parts, give it a unique character.

It is a district of young people, because as many as every fifth of its inhabitants have not finished yet 15 years! Due to the immediate vicinity of Śródmieście, Ochota is an exceptionally attractive place for investors. The largest international concerns have their headquarters here, High-rise buildings and new housing estates are being built here.

Almost counting 180 thousand inhabitants, the district is developing very dynamically, mainly due to the great interest on the part of developers erecting luxury apartment buildings here. However, Saska Kepa must not be forgotten either, today fashionable among pop culture stars, once aspiring to be called an enclave of aristocracy.
Praga Południe is also Skaryszewski Park, which is a real oasis of greenery and a great place for summer walks.

Sometimes called "real Praga" it is one of the districts, in which you can find numerous traces of "old Warsaw". It is also one of the oldest districts in Warsaw and has retained its historical character to this day. Unfortunately, Praga Północ is also the object of growing interest from investors, who, in pursuit of business success, are not always able or willing to appreciate its historical heritage.

The first mentions of it come from 1915 year, but already in 1939 - five months before the outbreak of World War II - obtained city rights. Today it is a residential, recreational and sports district. Until 30% its surface is covered by forests.

The most famous and recognizable district of the capital, a real "city within a city". Warsaw as we know it from movies and series is largely Śródmieście. Although it only takes 3% the administrative area of ​​the metropolis, it lives here all the way 10% its inhabitants. Most of the most important Polish offices are also located here.

Śródmieście is a business center, policy, sport, culture… This can be exchanged for a long time, enough to say though, that the district is the beating heart not only of Warsaw itself, but also Poland. And the most famous building of the communist era dominates over it: Palace of Culture and Science - formerly named after. Joseph Stalin.

It is located in the right bank of Warsaw and is an exceptionally diverse district. We can find here both typical industrial areas, as well as strictly residential areas - in Targówek and Bródno they are mostly blocks of flats, Zacisze is built up mainly with single-family houses. However, Targówek is commonly regarded as a typical "bedroom" of the city.

Tiny and quite distant from the city center, Ursus is mostly a residential district. Housing construction has been developing excellently here for several years - so much attractive, that new apartments are here, as for Warsaw standards, still relatively cheap.

It is another "city within a city" and the largest "bedroom" of the capital. It is situated in the southern part of the city and occupies almost 9% its total area. Due to good communication with the center of Warsaw and a large population of residents, it is doomed to rapid development. Due to the infrastructure - cultural, scientific, retail and service - in Ursynów you can basically spend your whole life without visiting any other districts of the capital.

Located in the South, on the right side of the Vistula (directly adjacent to it) Wawer is a district of single-family houses and sports and recreation centers. There are also many guesthouses here, which undoubtedly results, among others, from its "green" character - up to 35% the land is covered with forests.

Still in the first half 2002 year was not a district of Warsaw. It is a unique place on the map of the capital - a real oasis of green and healthy air. In over 60% covered with pine forests, it has a specific microclimate, thanks to which many residents of Warsaw treat it like a "handy spa"

It is known primarily for… known! The district of exclusive apartments and luxurious villas magnetically attracts the rich and recognizable - people of politics, business and broadly understood art. Everything is in Wilanów, what you need to live, and even more: golf courses, monuments, nature reserves and expensive shops. At the same time, it is one of the oldest inhabited areas in modern Warsaw.

The largest Polish airport is Chopin Airport, i.e. the Warsaw-Okęcie Airport. It is located in this district. Italy captures primarily the intimate buildings - which is largely due to the construction restrictions imposed by air traffic safety requirements. It is also a district, which has one of the lowest unemployment levels in the entire capital.

Once an industrial suburb of the capital, today an attractive investment area. New housing estates are being built here, and many of the largest ones locate their headquarters, international companies. Interestingly, according to police statistics, it is also the most dangerous district of Warsaw.

Wola, on the other hand, has enormous historical significance, because in the 17th century the elections of successive kings of Poland were held here as part of free elections.

It is considered by many - especially its older part - to be the most beautiful district of Warsaw. Żoliborz has a residential and recreational character, it is full of green areas and places of exceptional historical importance. And it is right here, not counting of course Warsaw parks, chestnuts are the most numerous in autumn. The same, about which the singer of the band T-Love sang in the song with the meaningful title "Warsaw".