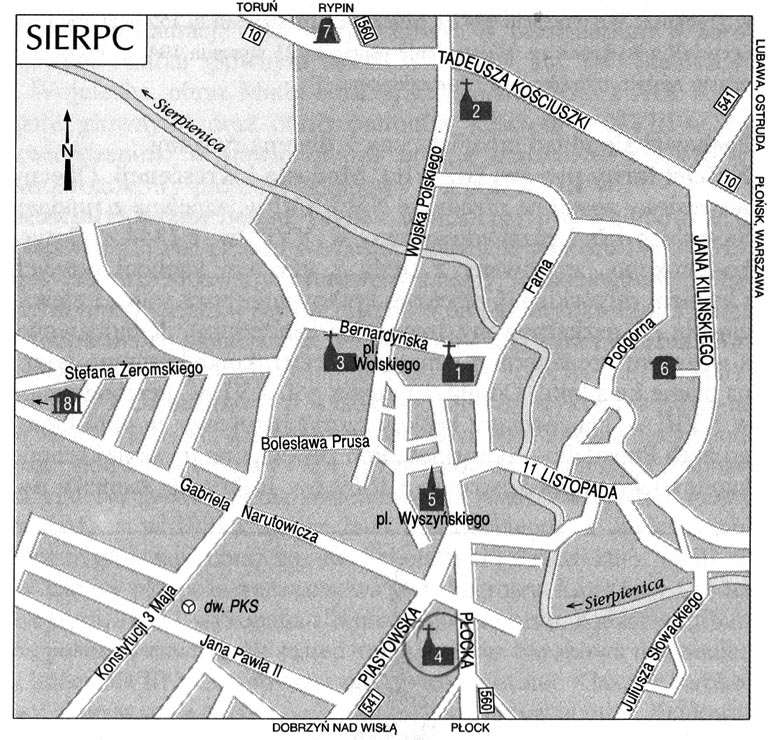 1. St.. st. Wita, Modesta and Krescencji 2. Church and Monastery of the Benedictine Sisters 3. Church of the Holy Spirit 4. St.. Stanisław t Kostka 5. Town hall 6. Manor house in Kasztelanka 7. Monument dedicated to the inhabitants of Sierpc who died during World War II 8. Open-air museum of the Museum of the Mazovian Countryside

Mentioned in 1155 r. as a castellan stronghold. From the 12th century. do 1322 r. property of Płock bishops, then the Duke of Płock, Wenceslas. W 1322 r. the city was located. Probably in 1389 r. became a private city. The development of the city as a cloth production center. W 1534 r. became the property of the Sierpski brothers. At that time, Sierpc was, next to Mława and Płock, one of the main centers of Northern Mazovia. Then ^, it often changed owners. W 1 half. XVII w. the city was divided into two royal and private parts. Seriously damaged during the Swedish invasion. WITH 1739 r. the first mention of a Jewish settlement in Sierpc comes from (Czap-lin district on the right bank of the river). From 1793 r. in the Prussian partition. In years 1807-15 incorporated into the Duchy of Warsaw. Then in the Kingdom of Poland. W 1 half. XIX w. industrial development and the establishment of a grain trading center. A brewery and a distillery were established, and then cloth and carpet factories.

During this period, the street layout was changed and a new town hall was built. During the January Uprising 5 February 1863 r. the city was taken over by a population of approx. 400 insurgents unit under the command of Walerian Ostrowski. A few days later, 8 February, the Russians successfully counterattacked, and the commander of the Poles died during the fight – Ostrowski. During World War I, a narrow-gauge railway line to Nasielsk was opened, which later (1924) has been changed to standard gauge. During the war 1920 r. city 12-21 August was occupied by Bolshevik troops. Entry of troops, which was characterized by the plunder and looting of the city, was preceded by skirmishes in its suburbs. From 14 August, a Bolshevik stationed in the city 54 The Rifle Division of the 4th Army. Several large industrial plants were established here in the interwar period, m.in. power station. W 1937 r. launching new railway connections to Płock, Brodnica and Toruń. During World War II, Sierpc was incorporated into the Reich. A ghetto for Jews was established, labor camp and prison. The extermination of the Jewish population took place and numerous executions took place. The Germans deported Jews from Sierpc to Nowy Dwór Mazowiecki and Mława, and from there to the extermination camp in Treblinka. In September 1942 r. the Nazis shot here 152 students and teachers from Bydgoszcz. The liberation has happened 21 January 1945 r. After the war, the city was rebuilt and expanded.